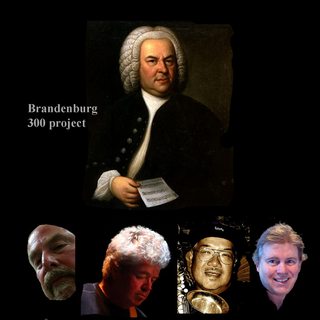 Bach was orphaned at age 10. Taken in by his brother’s family, he would transcribe Vivaldi and other composers secretly in his room until the wee hours. It's kind of the way we, as children, would read, listen to music, or play with our phones under the covers after bedtime. What did Bach hear in his head writing down the works of others over and over? Did he hear his own works improvising with theirs?

I think he did. After having played all of the Brandenburg it seems to me that much of his composition is a reaction to the works of others. He knew their weaknesses, the places their talent couldn't take them, and he filled that space - and much more - for the rest of his life.

I believe the Brandenburg resonates so deeply and for so long because of the events in Bach’s life during the period of its composition. Almost all musicians achieve greatness because they put all of themselves into every song, and when Bach was writing the Brandenburg his beloved wife Maria Barbara, mother of his seven children, a son and his brother all died while he was on a road show for his patron. The letters informing Bach had been intercepted by the Prince’s handlers so as not to upset the Prince. He found out when he walked through the door to find four of his children motherless and hungry. He must have been emotionally raw, memories of his parents death mixed with the stages of grief played out in the music pouring from his soul onto the page. I suggest he was less filtered in this time, and therefore the musical themes more declarative. Pulling punches would have been hard when obsessively composing, now further fueled by questions about his faith and family. Then about a year into writing the Brandenburg he met Ana Magdalena, his true love, who would bear him 13 children and work side-by-side with Bach for the rest of his life.

Auditioning as a soprano for his choir, Ana Magdalena – a beautiful 20 year old – entranced the 35 years old Bach. She became a great mother to the 13 children she had with Bach in addition to the four surviving children from Maria Barbara.. He must have fallen deeply in to love and gratitude at finding the mother he so needed, and the muse that inspired greatness. She loved, inspired and rescued him.

After the extreme lows experienced during the first year of writing the Brandenburg, the highs of new love and the recovery of hope must have been spectacular.

This journey from family harmony, to the depths of despair, to the dizzying heights of new love traverses most important things in life, and are so regardless of wealth, race, religion and all the other things that separate us. The Brandenburgs bind us together through our common experience of life, death and love.

I trace the start of the Brandenburg 300 Project to when I first heard the Brandenburg Concerto while doing T’ai Chi on a floating dock during a sunset in Tahiti. Upon my return home, I listened to the Brandenburg every day for 2 ½ years. I only played electric bass at the time, and didn’t get far with the Brandenburg. Thirty-five years, and a lifetime of music later, I took up playing the EWI, an electronic wind instrument that’s sort of like a MIDI keyboard, only it’s played somewhat like a clarinet. Falling in love with the English Horn sound the EWI makes, I noticed I was playing a Brandenburg melody and decided to learn all the parts of the second Brandenburg Concerto. Parts started coming quickly. After a few months, I started re-arranging the parts to merge some of my favorite counterpoint lines with the melody and bass lines. Then studying the life of Bach, and the history of the Brandenburg Concerto, I further re-wrote some of the sections based on my sense of Bach, and began incorporating bits and pieces of the jazz, funk, rock, country, African, Indonesian, Brazilian and other musics that are part of my musical life. Eventually a series of duets and a recording concept emerged.