Photograph of Interior Mural in Bldg. 1489 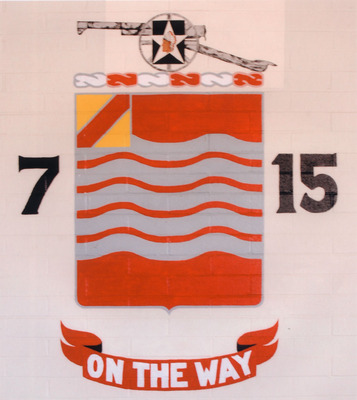 Photograph of an interior mural in Bldg. 1489, 2nd floor classroom, south end of building, south wall, 62.5" wide x 74.5" high. This is the unit Coat of Arms for the 7th Battalion 15th Field Artillery Regiment, nicknamed "Indianheads." The white star Indian head represents the 2nd Infantry Division where the 15th Field Artillery originated from. The cannon under the Indian head represents a French 75mm field gun used in World War I. In the upper left of the mural is the emblem of the 4th Division from where personnel were assigned. The five wavy lines represent the rivers the 15th crossed in France during WWI. The wavy red lines represent the lives lost during the battles.