Photograph of Interior Mural in Bldg. 2290 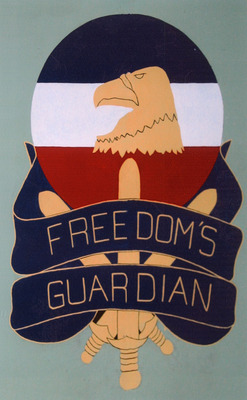 Photograph of interior mural in Bldg. 2290, Recreation Stage, west right wall, 9th Street between 2nd and 3rd Avenues, no dimensions. United States Army Forces Command (FORSCOM) Distinctive Unit Insignia. FORSCOM is the organization that provides personnel, equipment, and other resources to U.S. Army Combatant Commanders throughout the world. The round horizontal blue, white and red color background is worn as a shoulder patch on the uniform. The eagle refers to the national symbol for freedom and to the organization's motto printed below it. The sword symbolizes protection and guardianship. It is pointed up to denote readiness for combat. The three swords together represent the three components of the U.S. Army; the Regular Army, Army Reserve, and the Army National Guard. The mural and building have been removed.